Sexual abuse is a widespread problem in South Africa’s prisons. Fortunately, this violence can be prevented.

Prisoner rape has long been a hidden issue in South Africa, so its true prevalence remains unknown. Yet a growing body of research, backed by accounts from prisoner rape survivors , shows that this abuse is disturbingly common. People who are victimised tend to be those who are seen as “feminine” and as not living up to hyper-masculine stereotypes. Many are young, small in stature, or in prison for the first time. Gay and transgender prisoners are uniquely vulnerable, as are those with mental illnesses and disabilities. Most survivors are abused again and again, too afraid and humiliated to step forward to report the violence. 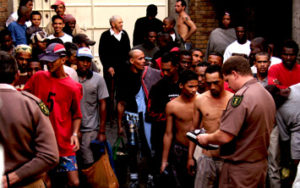 designed for 40 prisoners frequently hold closer to 100, have poor ventilation, and contain a single unshielded toilet. During “lock-up” hours, which last from the afternoon to the next the morning, people are put in communal cells with minimal staff supervision, leaving vulnerable prisoners at the mercy of gangs. During this time, a single officer is in charge of entire sections of a prison, with limited access to cells — even in emergencies. Not surprisingly, these conditions fuel prison violence, including sexual abuse.

Despite the seriousness of this issue, and its implications for the wider community, the well-being of prisoners is not a popular concern. Instead, public attitudes tend to demonise prisoners, hurting efforts to protect their basic human rights. These attitudes are intensified by the pervasive fear of violent crime.

JDI-SA is dedicated to shining a light into these darkest corners of society and to stimulating the change necessary to uphold the human rights of inmates. The rape of prisoners, whether committed by corrections staff or by inmates, is a crime and is recognised under international law as a form of torture. Cases of sexual abuse in detention are not rare, isolated incidents, but the result of a systemic failure to protect the safety of inmates. Contrary to what many people think, this violence is not an inevitable fact of prison life. Rather, sexual abuse in detention is preventable. It is the result of a lack of political will, poor corrections policies, and the absence of oversight and accountability.

When the government takes away someone’s freedom, it takes on an absolute responsibility to keep that person safe. Rape is not part of the penalty.